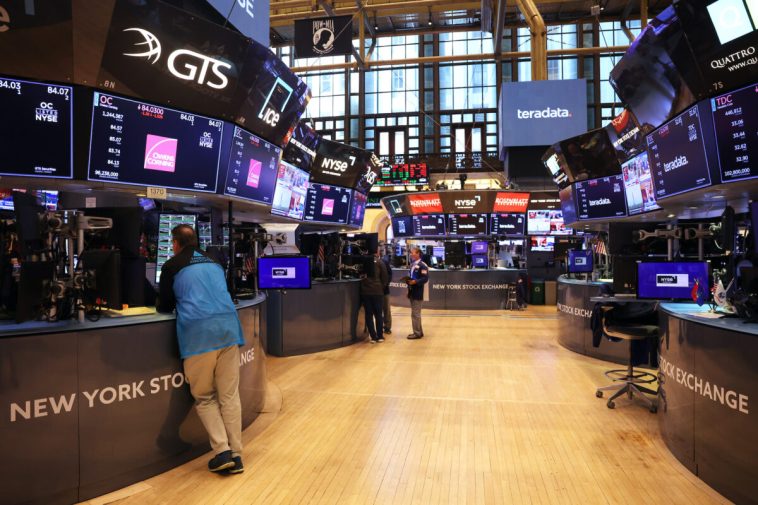 We are largely at the same level of jobs that we had prior to the pandemic, 153 million, but the jobs creation trajectory that would have occurred in that period is lost, likely permanently. The question now is whether, with a slowing economy and a Federal Reserve (Fed) tightening interest rates, the current trajectory can be maintained or whether the job creation will flatten or decline. We anticipate it will be the latter.

The majority of jobs were, again, in lower-wage sectors, such as leisure ad hospitality, and sectors that are largely government supported, such as education and health services. That said, the higher-wage sector of professional and business services also showed strong jobs performance, at 46,000 jobs (albeit fewer than last month), with an average weekly wage of more than $1,400.

Real wages—which we define as annualized average weekly wages minus the 12-month average trimmed mean inflation rate for personal consumption expenditures, for August (the latest available data)—currently 4.74 percent, were mixed, with most sectors suffering real wage losses, as detailed in our quarterly chart of real annual year-over-year wages.  (See the real wage data below. We report this data at the end of each quarter.) 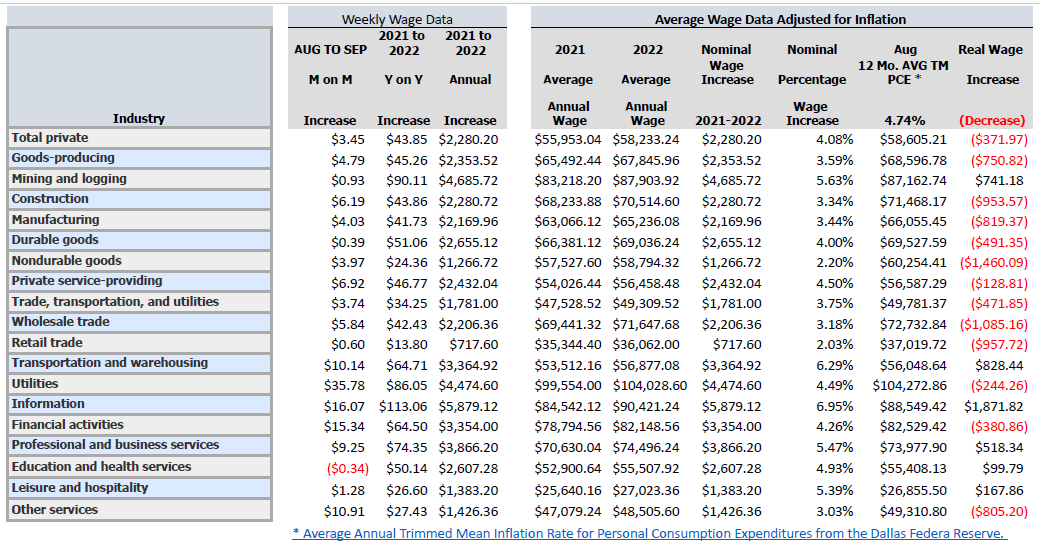 Quantitative tightening is always disruptive to markets. Milton Friedman won the Nobel Prize in economics for proving that Federal Reserve (Fed) monetary tightening between the spring of 1928 through October 1929  was the proximate cause of the Crash of 1929 and the subsequent Great Depression. Former Fed Chair Ben Bernanke even admitted such in 2002.

Late last month, we saw how such “unknown unknowns” can grievously disrupt markets in a tightening monetary environment  in the UK gilt market (gilts are similar to U.S. Treasuries). I wrote about the disruption at the time, noting that “the global markets are decidedly unstable” (although this piece by New York Times reporter Joe Rennison provided a more detailed explanation).

Basically, a sleepy and obscure corner of the UK gilt  market called the Liability Driven Investment, or LDI strategy, was adversely affected by rising rates. The value of  gilts fell as interest rates increased. Pension funds, which tend to move slowly, incurred margin calls that caused a “’self-reinforcing spiral’” that threatened “severe disruption of core funding markets and consequent widespread financial instability,” according to a letter from Jon Cunliffe, the Bank of England’s (BOE) deputy governor for financial stability, which was quoted in the Financial Times.

The market pressures have been ameliorated, somewhat, only because the BOE intervened to prop-up the gilt market, both by promising to buy them and by delaying a planned sale of gilts it had acquired during the pandemic.  n effect, the BOE ceded the ground it had made on tightening UK monetary policy and chose, instead, to offer the market greater liquidity. (Notably, the BOE has not bought gilts the last couple of days, and yields again spiked, so the matter has not been fully resolved.) The stresses from the UK gilt shock are reflected in the rightmost peak of this chart from the Treasury Department’s Office of Financial Research (OFR).

There are also market concerns with the rhetoric and posturing over the war in Ukraine. If, as Samuel Johnson wrote, “Nothing focuses the mind like a hanging,” nothing will focus the markets like the prospect of nuclear war. A sell-off could be triggered instantaneously if there is a “war or rumors of wars” involving nuclear weapons.

At this writing, the inversion on the two-year and 10-year Treasuries is 40 bps, up from 21 bps in our August jobs report. We would have liked to see the Fed reduce its balance sheet sooner and  more aggressively, as we have desired since last year, but  now, with concerns about market liquidity,  any such reductions must be done with extreme caution. Had the Fed started to reduce its balance sheet sooner, we would be in a better place with less or no inversion. We fear the Fed may be too late and, consequently, the U.S. economy will have to suffer longer-term inflation.

The Institute for Supply Management’s print of the Manufacturers Purchasing Managers’ Index, the Manufacturing PMI, registered growth, just barely, at 50.9 percent in September, down from 52.8 percent in August. The Institute’s Services PMI for September showed growth at 56.7 percent, down slightly from August’s 56.9. A reading above 50 signals growth.

Household debt service as a percentage of disposable personal income keeps rising, particularly consumer debt. As reported by the Federal Reserve Bank of New York: “Credit card balances saw their largest year-over-year percentage increase in more than 20 years, while aggregate limits on cards marked their largest increase in over 10 years.” This is to be expected in an inflationary economy, when wages fail to keep pace with higher prices and workers turn to their credit cards and consumer loans to maintain their lifestyles.

Total business inventories remain ridiculously high, and the highest on record, a factor mentioned by many of the respondents in the ISM report.

The IBD/TIPP Index of Economic Optimism for September printed at 44.7, up 17.3 percent from August. (The index signals optimism at 50 or above.)

The Federal Reserve Bank of Atlanta is projecting third quarter 2022 to print at about 2.6 percent growth. The projection is based on enhanced growth in personal consumption expenditures, principally from  a jump in net exports. 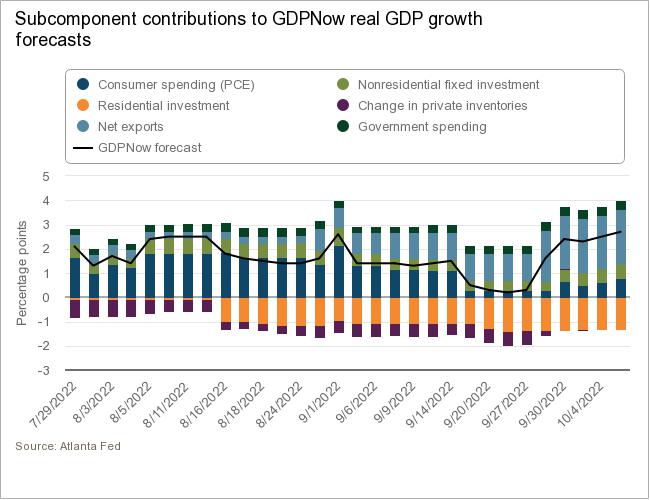 The two quarters of decline in the first and second quarters of 2022 printed at a technical recession, which will need to be confirmed by the National Bureau of Economic Research Business Cycle Dating Committee, likely after the second revision of the data, on Sept. 29. However, we reiterate our thesis that much of the negative GDP (gross domestic product) in the first and second quarters of 2022 was attributable to an anomaly with imports and inventories, as we explained in more detail in our second-quarter 2022 GDP report. As we see net exports grow in the third quarter, it tends to support our thesis. (Net exports are a subtraction from total GDP if imports exceed imports; but if exports exceed imports, the net number is an increase in GDP.)

Inflation continues to print at an unacceptable level, which will only be exacerbated by OPEC’s decision to cut oil production by two million barrels a day.

We continue to believe that real overnight rates will need to go to 3.5–5.0 percent, and stay there for at least three quarters, to thoroughly extinguish inflation and, more importantly, inflationary expectations. To accomplish that, we reiterate our call for the Fed to increase the limit of the Treasuries and mortgage-backed securities that it allows to “burn off” up to at least $125 billion at its meeting next month to reduce the Fed’s balance sheet more rapidly. Effectively, this would be yield curve control to reverse the inverted yield curve and return the economy to realistic terms. Otherwise, we see a long, drawn-out period of economic malaise as the Fed pursues a “soft landing.” We believe the Fed should lean into a sharp, short recession to return the economy to pre-pandemic growth; but—as discussed above—the Fed must be “at the ready” to stabilize markets if some “unknown unknown” affects market stability. Again, this is all because the Fed was too late recognizing that the inflation we saw at the end of last year was genuine, not “transitory.”

We think the Fed will stick with rising rates for the foreseeable future, and that it will raise rates 75 bps going into its November meeting. We think the terminal rate, the overnight rate necessary to kill inflation and return the Fed to its preferred 2 percent growth rate, is at least 5 percent, and the sooner it is achieved—notwithstanding a likely recession—the better. Otherwise, we foresee inflation and slow or negative growth—”stagflation”—for at least eight quarters.

But despite the Fed’s purported “independence,” we think it is far more likely the governors’ board would prefer to suffer such lengthy malaise coming into the presidential election cycle than risk the kind of  sharp, short recession that cuts into employment and retirement accounts and bankrupts marginal and over-leveraged businesses. That’s what we would prefer. (Would you rather have the Band-Aid pulled off in one, quick, painful pull or endure albeit lesser pain for much longer? Those are the choices at this point. )

We believe third-quarter 2022 GDP will print in the neighborhood of 2 percent, plus or minus 50 bps. We are monitoring “gray swans” (i.e., events known and possible to happen, but assumed unlikely) in the Taiwan Straits, Ukraine, and Europe, and will post information on those in our Twitter feed, @Stuysquare.

DISCLOSURE: The views expressed, including the outcome of future events, are the opinions of The Stuyvesant Square Consultancy and its management only as of October 7, 2022, and will not be revised for events after this document is submitted to The Epoch Times editors for publication. Statements herein do not represent, and should not be considered to be, investment advice. You should not use this article for that purpose. This article includes forward looking statements as to future events that may or may not develop as the writer opines. Before making any investment decision you should consult your own investment, business, legal, tax, and financial advisers. We associate with principals of TechnoMetrica on survey work in some elements of our business.

Note: Our commentaries most often tend to be event-driven. They are mostly written from a public policy, economic, or political/geopolitical perspective. Some are written from a management consulting perspective for companies that we believe to be under-performing and include strategies that we would recommend were the companies our clients. 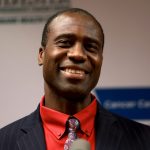