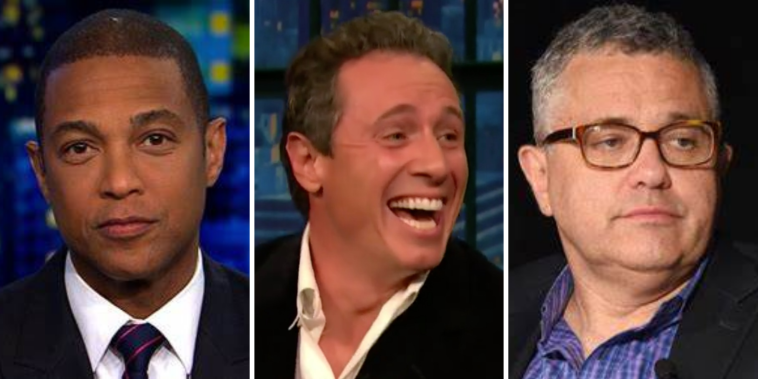 Recently-fired CNN host Chris Cuomo, brother of former New York governor Andrew Cuomo, initiated legal action against his former employer on Wednesday, seeking $125 in an arbitration claim. In so doing, he blasted former colleagues Don Lemon and Jeffrey Toobin for their unethical behavior, and noted that the network continues to employ these men.

“CNN anchor Don Lemon,” the suit uncovered by Deadline states, “was widely criticized for a flagrant breach of journalistic ethics when actor Jussie Smollett testified at trial that Lemon had texted him to warn him that Chicago police did not believe Smollett’s allegations of suffering a racist, homophobic attack. Lemon had covered Smollett’s accusations and his subsequent investigation and prosecution, so intervening in the ongoing investigation by texting Smollett was an inexcusable breach of ethics. Yet CNN did nothing; Lemon was not disciplined in any way.”

“Similarly,” the suit continues, “in October 2020, CNN’s chief political analyst, Jeffrey Toobin, was suspended and fired by The New Yorker, where he also served as a staff writer, after he masturbated while on a video call with colleagues. Despite this sordid act of sexual harassment, CNN took no disciplinary action against Toobin; instead, CNN permitted Toobin to take a seven-month “hiatus” to “deal with a personal issue.” CNN later allowed Toobin to return to work without even issuing a public apology.”

Cuomo had announced previously on Dec 6 2021, shortly after his firing, that he was contemplating such action against the network. According to Deadline, the legal complaint mentioned that Cuomo was suing for the remainder of the salary owed to him under his employment contract, which he considers to have been breached by his termination.

“As a result of Turner’s indefensible choice to unceremoniously fire him,” the suit reads, “Cuomo has been damaged in countless ways. Cuomo has had his journalistic integrity unjustifiably smeared, making it difficult if not impossible for Cuomo to find similar work in the future and damaging him in amounts exceeding $125 million, which includes not only the remaining salary owed under the Agreement, but future wages lost as a result of CNN’s efforts to destroy his reputation in violation of the Agreement. Cuomo now seeks to recover the full measure of his damages against Turner and CNN.”