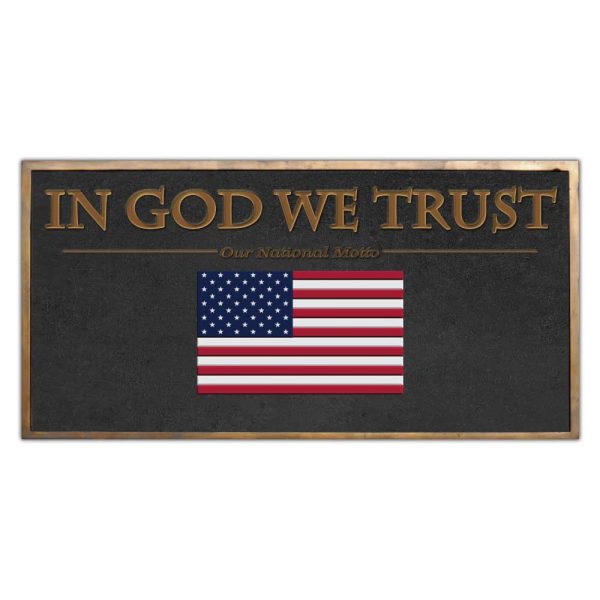 One day in April, Dan Regenold was sitting at his desk, handling a $1 bill, when the words on its flip side, “In God We Trust,” seemed to leap off the paper.

Regenold began to wonder: How many times had he—and many other Americans—looked at U.S. currency without giving those words, our national motto, a second thought?

“I almost feel like I was tapped on the shoulder, and someone said, ‘Hey, think about this,’” Regenold told The Epoch Times. He is a managing board member of EmpowerU America, a nonprofit “university” that offers free educational seminars near Cincinnati, Ohio.

In September, Regenold and EmpowerU launched “The ‘In God We Trust’ Project,” which seeks to place framed copies of the national motto in Ohio schools.

The project, believed to be the only active one of its kind in Ohio, follows in the footsteps of similar campaigns promoting the motto across the nation over the years. Sometimes, controversy has followed even though promoters see the motto as a bridge across America’s ideological divide.

In both Ohio and Texas, state laws require schools to display donated signage that proclaims “In God We Trust”—as long is it meets specific conditions. The Texas law is only a year old. Regenold was surprised this summer when he learned that Ohio’s law has been on the books since 2006; he believes it has remained largely unnoticed in recent years.

Meanwhile, a California woman has been crusading since 2002 to publicly post the national motto in government buildings across the United States.

Jacquie Sullivan’s nonprofit organization, In God We Trust America Inc., has tallied 753 “victories” where local governments voted in favor of such displays,  she told The Epoch Times in an Oct. 26 interview.

Now 82 and retired, Sullivan began her mission in Bakersfield, California, where she served 25 years on city council. In 2001, after hearing about an East Coast protest of “In God We Trust” on a public building, Sullivan was indignant. She decided to push back from her West Coast home.

The following year, Sullivan’s proposal to display the motto in city hall drew protesters to Bakersfield, between Fresno and Los Angeles.

In the two decades since then, 147 cities and counties in California have followed suit, Sullivan reports, adding, “If we can do it here in California, it can be done anywhere.”

Faith in God is a rare issue that transcends political party lines, Sullivan said. While she describes herself as a conservative, she points out that “In God We Trust” resolutions seem to enjoy bipartisan support in most places.

In 2011, the U.S. House of Representatives reaffirmed “In God We Trust” as the national motto, and encouraged its public display “in all public buildings, public schools, and other government institutions.”  The measure passed by a vote of 396-9.

“Can you imagine anything today having such a strong bipartisan victory in  Congress?” Sullivan asked.

In its 2014 Religious Landscape Study, the Pew Research Center found that 83 percent of respondents were “certain” or “fairly certain” that they believe in God.

“I proudly, knowingly say that our motto is intended to be all-inclusive, nonpartisan, and nondenominational,” Sullivan said. That’s why she believes that promoting the motto is “one of the most important unifying efforts to go on in our country.”

Sullivan supports the initiatives in Texas and Ohio; she would like to see the motto appear in hundreds more public spaces, “from classroom to courtroom.”

In Texas, some people objected to the motto being displayed in schools. They considered it a religious intrusion into a public, non-church setting, The Epoch Times reported in August.

But, in Sullivan’s view, using the motto in public spaces doesn’t breach the oft-quoted “separation of church and state” doctrine.  Her view of that principle: “It’s meant to keep the state out of religion; it’s not meant to keep religion out of the state.”

Regenold said the history of the motto, which he researched after that inspirational moment in his office, is intertwined with the history of America.

Although Congress approved “In God We Trust” to be used on coins in 1864, it took another 92 years for those words to be adopted as the official national motto.

President Dwight Eisenhower took a step in that direction when he gave a radio address in 1954. He stated: “Out of faith in God, and through faith in themselves as His children, our forefathers designed and built the Republic.”

Regenold said Eisenhower considered faith in God “a unifying feature of the American experience.” Americans of varying religions may use different words in their prayers and hymns, but they share a common theme: trusting in God.

Thus, Eisenhower pushed to have the words, “under God,” added to the Pledge of Allegiance. Two years later, in 1956, Eisenhower signed a law officially designating “In God We Trust” the national motto.

Regenold prepared a synopsis of the motto’s history and affixed it to a plaque that will accompany framed posters of “In God We Trust,” which donors sponsor.

“I thought it would be great to combine the history with [the motto] and make it kind of a learning opportunity for students,” Regenold said.

In a little more than a month, the patriotic wall decorations have been sent to 28 Ohio school districts, all sponsored by donors, Regenold said.

People wishing to donate a poster and plaque can choose from four designs on EmpowerU’s In God We Trust Project website.

Regenold owns a frame-manufacturing business called Frame USA, which provides the posters “at cost,” he said. Each poster costs roughly $90 to $105, including shipping to the school, Regenold said.

So far, the initiative has generated only positive responses, he said.

Helga Silven, a 1973 graduate of Clermont Northeastern High School in Ohio’s Clermont County, donated one of the framed posters to her alma mater in anticipation of her 50th class reunion next year.

Silven, who now lives across the Ohio River in Bellevue, Ky., has been attending EmpowerU programs for several years.

After learning about the organization’s “In God We Trust” project, she decided to become a sponsor.

“I think many of the schools are moving away from the traditional values of the Pledge of Allegiance, the National Anthem—all of the things like that, that we hold dear,” she told The Epoch Times. “I just wanted to bring that to the forefront a little bit.”

“Many people feel that God has been kicked out of schools for a long, long time and this is one way to insert that back into our schools,” she said. 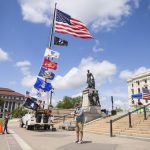 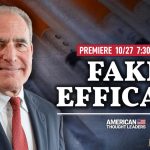