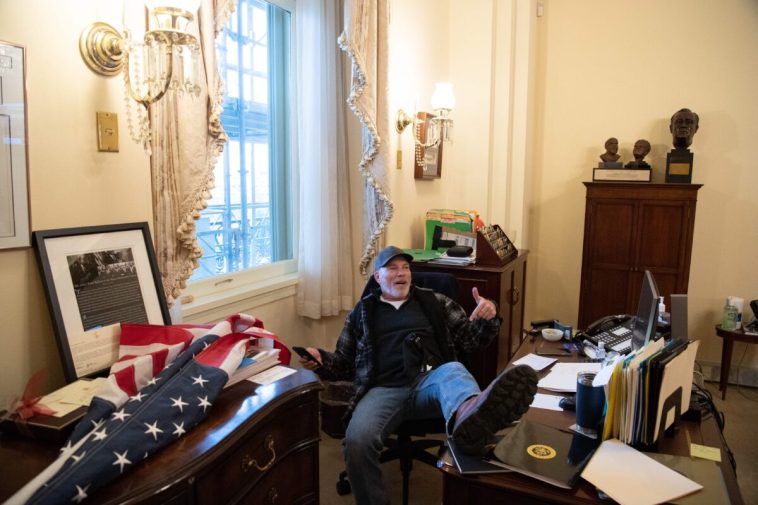 A federal District of Columbia jury took less than two hours to find Richard “Bigo” Barnett—the man in the now-famous photo with his feet on a desk in the office of then-House Speaker Nancy Pelosi—guilty of four felonies and four misdemeanors for his time in the U.S. Capitol on Jan. 6, 2021.

Jury deliberations resumed at 9 a.m. E.T. on Jan. 23, after a previous round of brief deliberations on the afternoon of Jan. 20. At about 10:30 a.m., the jury told U.S. District Judge Christopher Cooper that they’d reached verdicts on all counts.

The dangerous weapon charge came from Barnett carrying with him a 950,000-volt “Hike ’n Strike” walking stick that doubles as a flashlight and stun device. He said there were no batteries in the device and thus the stun function wasn’t operable on Jan. 6, 2021.

It was the latest in a series of lightning-quick verdicts from District of Columbia juries in Jan. 6 cases. No Jan. 6 defendant has been acquitted outright by a D.C. jury. The few acquittals came during bench trials.

Dozens of motions for a change of venue in Jan. 6 cases have been rejected by every D.C. federal judge who has heard them.

In a media briefing after the verdicts were read, McBride said they made extensive efforts to secure a change of venue because the District of Columbia is made up of about 95 percent Democrat voters.

“Everybody who’s a January Sixer who’s been accused of a crime is looking to have their case heard somewhere else because nobody feels safe here,” McBride said.

Barnett will appeal, according to defense attorney Joseph McBride.

“Our team fought like hell,” McBride said in a Twitter post. “We were relentless, creative, & left no stone unturned in Mr. Barnett’s defense. We have multiple appellate issues that we preserved & will litigate.

“Bigo Barnett could spend the rest of his life in prison—for a trespass. Pray for him & his family.”

Cooper set sentencing for May 3.

McBride said Barnett’s decision to testify in his own defense was “unequivocally the right one.”

“He had a story that needed to be told. People needed to know why he came here, what his intentions were, and what he did while he was here,” McBride said. “The man got up there and he told the truth, and it didn’t work out for him. But at the end of the day, we have no regrets whatsoever about that choice.”

The judge rejected a motion filed by defense attorneys on Jan. 20 to declare a mistrial. Barnett’s attorneys had argued that prosecutors charged their client with obstructing a nonexistent proceeding, because Congress has no role under the law to “certify” the results of a presidential election.

In a filing with Cooper, Barnett’s lawyers argued that federal prosecutors misled the jury about how the 12th Amendment to the U.S. Constitution and Chapter 3 of the U.S. Code apply to the case against Barnett.

“The indictment charged, and the government prosecuted, obstruction of a non-existent proceeding,” the motion said. “No crime can have occurred.”

On Dec. 22, 2022, prosecutors issued a superseding indictment against Barnett, alleging he obstructed “Congress’s certification of the Electoral College vote as set out in the Twelfth Amendment of the Constitution of the United States and 3 U.S.C. [Sections] 15-18.”

The motion for mistrial says that neither the Constitution nor applicable federal law mentions certification as part of Congress’s role.

“All Congress does is watch the vice president open certificates and tally the vote—where states already certified the vote count,” the motion said. “There may be an objection and debate, where unless both House and Senate agree on the objection, the votes are counted. There is no written or oral certification by Congress as part of the law.”

According to trial testimony, Barnett entered the Capitol at 2:43 p.m. on Jan. 6, 2021, as a crowd surged through the giant Columbus Doors on the east side of the building.

Barnett testified that he had no intention of going inside the Capitol but was pushed in by crowd momentum. Both houses of Congress had stopped work by this time, as members were being moved to safety.

When Barnett entered the speaker’s office, he said, journalists asked him if he wanted to have his photo taken. He then sat down behind the desk of Pelosi aide Emily Berret.
He said they told him to “act natural,” so he put a foot on the desk and leaned back in the chair.

He took an envelope from Berret’s desk and got blood on it from a cut on his hand. He kept the envelope, leading to a charge of theft of government property. He left a quarter on the desk that he said was to pay for the envelope.

On his way out of the Capitol, Barnett realized he left his U.S. flag in Pelosi’s office and got into a verbal confrontation with a Capitol Police officer when he wanted to go retrieve it. His language ranged from bargaining with the officer to foul-mouthed bluster. Prosecutors said Barnett was threatening the officer, while the defense said it was a short-lived “temper tantrum” in which he was “behaving like an idiot, like a fool.”

The statute used to prosecute Barnett and many other Jan. 6 defendants for obstruction of Congress—18 U.S.C. Section 1512(c)(2)—is controversial. Two District of Columbia judges have tossed out the same count, saying the law couldn’t be applied to deliberations of Congress. Many other D.C. judges have upheld its use in Jan. 6 cases.

The cases of dismissed obstruction-of-Congress charges were combined into one case before the U.S. Court of Appeals for the District of Columbia. Oral arguments in the appeals case were held in December 2022.

Before the start of Barnett’s trial, Cooper denied a motion to dismiss the Section 1512(c)(2) obstruction charge, ruling that “a count of electoral votes is the same as ‘Congress’s certification of the electoral vote count,’” the motion said.

Citing a ruling from the U.S. Court of Appeals for the Ninth Circuit, the motion said the plain language of the statute shows “an offense under § 1512(c) does not prohibit the obstruction of every governmental function; it only prohibits the obstruction of proceedings such as a hearing that takes place before a tribunal.”

Barnett’s attorneys said Judge Cooper was legislating from the bench, arguing he “rewrote the U.S. Constitution and 3 U.S.C. §§ 15-18 by saying counting equals certifying when it comes to a Congressional proceeding.”

Writing Law From the Bench?

“The argument that a ceremony equals a proceeding is already deficient, but that provides no excuse to write law from the bench or in the offices of the Department of Justice,” the motion said. “There is no dictionary that makes ‘counting’ a synonym with ‘certifying.’”

Barnett took the stand in his own defense on the final day of testimony. He was pressed repeatedly during cross-examination by Assistant U.S. Attorney Michael Gordon, who suggested he wasn’t being truthful in his answers. Barnett’s retort was spirited.

“You want to keep pressing me and break me down,” Barnett said. “I ain’t breaking down. I stand by what I say, sir.

Barnett several times mentioned brain injuries he suffered as a firefighter and from beatings he said he took at the hands of guards while held in the District of Columbia jail. The injuries affect his memory, he said. Barnett told his story of physical abuse in pretrial detention in the 2021 documentary “Patriot Purge.” “I’ve been slammed face first into the concrete,” Barnett said at the time.

“I do the best I can,” Barnett told Gordon. “You can see how confused I get sometimes. I am struggling with this. But I am not going to go back on what I believe.”

“But I’m not going to let you put words in my mouth that I thought I was breaking the law or this, that, or the other. That’s what your job is. I understand that. But I’m getting quite tired of it. I’m doing the best I can.”

During closing arguments, Gordon ridiculed Barnett’s testimony and explanations for his actions on Jan. 6, 2021. He said the defendant impeded the business that should’ve been conducted by Berret and others that day in the speaker’s office.

“She couldn’t do any of that,” Gordon said. “His presence sitting at her desk with his feet up, bleeding on and stealing her stuff, impeded government business, Emily Berret’s work, and the work of everybody in Speaker Pelosi’s office.”

Not About a Photo

Gordon said the prosecution of Barnett had nothing to do with the now-famous photo of him with his feet on Berret’s desk.

“We’re not here for the photograph. We’re here because the defendant committed eight crimes on January 6th, and the evidence has proven each of them beyond a reasonable doubt,” Gordon said.

“He thinks it’s all going to be OK because he’s Bigo. He’s going to escape consequences. He will not because you, the jury, I expect will go back, and you will come to the only conclusion supported by the law and evidence, and that is that this defendant is guilty of everything.”

Defense attorney McBride tore into prosecutors for overcharging Barnett and blowing his behavior way out of proportion. He urged the jury to separate any feelings they might have about Barnett the man.

McBride said the government’s classification of Barnett as a “tier one terrorist” shows how overboard the prosecution has gone. “Ladies and gentlemen of the jury, this is the government that our forefathers warned us about,” he said.

McBride wondered aloud what it is about his client that caused the Department of Justice to focus so heavily on him.

“Well, whatever it is, there is something about Mr. Barnett that renders him suspicious,” McBride said. “He’s so loathsome, so repugnant to the United States government that it has indicted him on eight charges.

“They have literally made a federal case out of an act of stupidity that could have been dispensed with a ticket and a fine.” 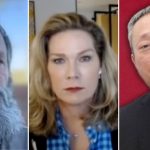 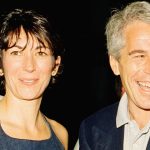