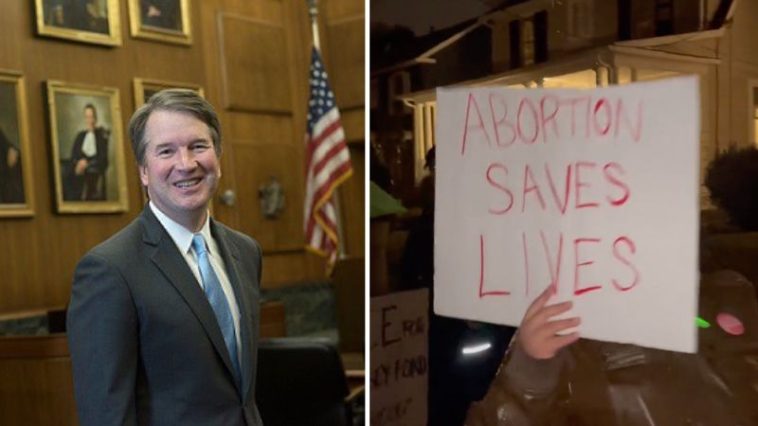 On Sunday, far-left activists protested outside Justice Brett Kavanaugh and Chief Justice John Roberts’ Maryland homes on the 50-year anniversary of the now-repealed Row v. Wade Supreme Court decision, while US Marshals allowed the protest to continue despite violating laws.

Daily Signal reporter Mary Margaret Olohan tweeted video of the roughly 20 protestors who were marching in the rain and chanting the call-and-response, “cut his time short—a rapist should not rule the court,” and “no privacy for us—no peace for you.”

According to the Daily Signal, the outlet asked nearby US Marshals why they were allowing the activists to continue with their protests. 18 U.S. Code § 1507 forbids picketing or parading “in or near a building or residence occupied or used by such judge, juror, witness, or court officer.”

The Marshals said that the activists were allowed to be on the sidewalk.

“More and more would come,” one Marshall said, noting that if the activists were arrested it could attract more to the location.

Protests at Kavanaugh’s home began after the May 2 leak that the Supreme Court planned to overturn Roe v. Wade. Groups like Ruth Sent Us and Jane’s Revenge planned and announced protests in May at the homes of Amy Coney Barrett, John Roberts, Samuel Alito, Clarence Thomas, Neil Gorsuch, and Brett Kavanaugh.

In early June, Kavanaugh saw a failed assassination attempt on his life by Nicholas John Roske.

The Supreme Court officially overturned Roe v Wade on June 24. In a 6-3 decision stemming from the case of Dobbs v. Jackson Women’s Health Organization, the Supreme Court ruled that the US Constitution “does not confer a right to abortion; Roe and Casey are overruled; and the authority to regulate abortion is returned to the people and their elected representatives.”

In July, protestors aligned with the pro-abortion group Ruth Sent Us chanted and drummed outside Kavanaugh’s home. 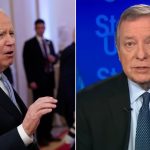 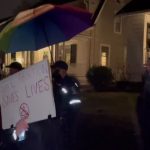