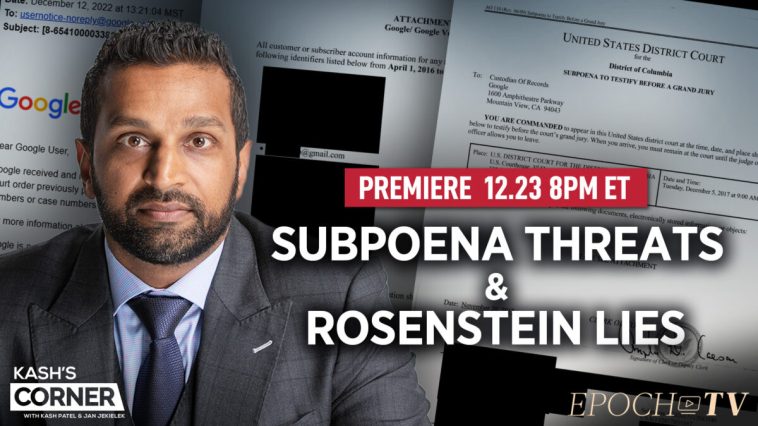 It was recently revealed that in Nov. 2017, the Department of Justice (DOJ) and the FBI issued a grand jury subpoena to Google for Kash Patel’s personal records, emails, and credit card information. “And I wasn’t the only one. We’ve confirmed at least one other senior congressional staffer was subpoenaed,” says Kash Patel.

At the time, Patel was senior counsel and chief investigator for the House Intelligence Committee’s Russiagate investigation under then-Chairman Devin Nunes.

“If you send out a subpoena to investigate a member of Congress and/or his staff, the Attorney General must sign off on that. That means Rod Rosenstein himself…had to have personally signed off on it,” says Patel. Attorney General Jeff Sessions had recused himself and vested authority in Rosenstein.

Two months later, in a closed-door meeting in January 2018, Rosenstein threatened to subpoena the records of Devin Nunes and his staff, Patel says. He would later deny issuing such a threat when asked by Rep. Jim Jordan under oath.

“How is it that Rod Rosenstein threatened to subpoena my emails and my records along with Congressman Nunes’ in January of 2018. Yet he had already knowingly authorized it two months prior?” says Patel.

In this episode, we discuss these growing scandals for the DOJ and FBI, and we also look at a recent “Twitter Files” drop that shows the FBI paid Twitter over $3.4 million between Oct. 2019 and Feb. 2021. This is just the tip of the iceberg, argues Patel.

“I bet you it’s ten times that amount… In January, the Republicans have to demand every relationship agreement between the FBI and every big tech company and every single dollar of our money that was spent by the FBI to put on the largest disinformation campaign to rig a presidential election,” says Patel.

“And if anyone thinks that it was a one-off, they are completely wrong.” 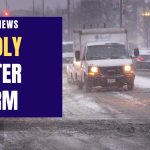 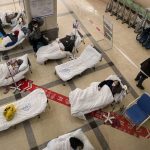