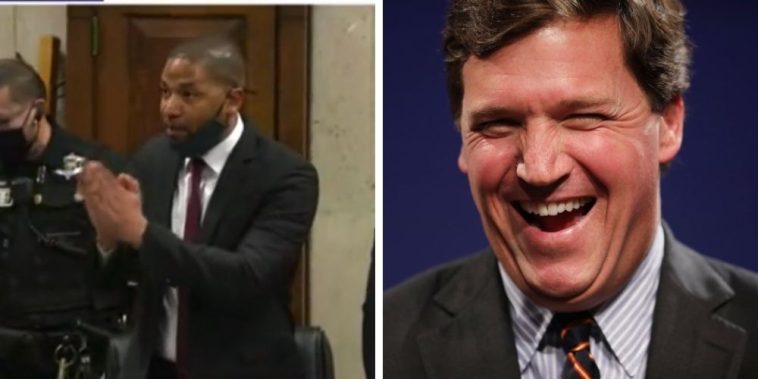 Tucker Carlson reacted live to the breaking news Wednesday night of Jussie Smollett’s release from jail on bond pending his appeal, saying “…you saw this one coming. Convicted hate-crime hoaxer Jesse Smollett was just sentenced to jail and now he’s been released from jail, or is about to be.”

“He was just a few days into his 150-day sentence. But this evening, an appeals court ruled that Jussie Smollett can go home while he works to get his conviction overturned,” Carlson said. “Because he’s not a Trump voter. He’s not one of those January 6 guys, rotting in solitary for more than a year. He’s Jesse Smollett. He’s a famous actor.”

“Smollett’s attorney said the appeals process will take longer than 150 days, so it’s only fair to let him out as the appeal works its way through the system, because …he’s a Hilary man.”

“They also argued Smollett was in danger in the Cook County jail, even though he was in solitary confinement. He could have beat himself up again. Apparently, those arguments took the day. So, Jussie Smollett is back home tonight.”